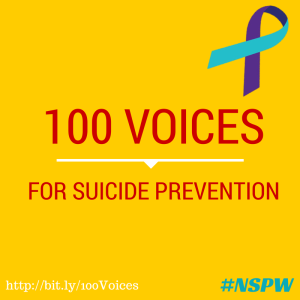 The tragic suicide news of Robin Williams a couple of months back shocked fans world over. It was disturbing to hear that a talented and famous Actor like him, decided to end his life ?  According to sources, depression was the cause of his untimely death. It’s shocking to know that a person with  family, wealth and fame can think of ending his life ? Did he feel that he had no one to turn to ?

This incident brings to light the seriousness of suicide and it’s harmful effects. The sad part is anyone can be a victim – the poor, the rich, the famous, man, woman, teenager and even a child. It’s a serious health problem that can strike anyone at anytime. It leaves it’s lasting effects on the victim’s family, friends and relatives. The effects last a life time.

Today is the 10th of September and we are utilizing this day to, create awareness on the subject, and various activities are being conducted world over to highlight the problem. World health organization and the International Association for suicide prevention ( IASP ) are co sponsors for the event.  The theme for this year is Suicide prevention : One world connected. I loved the the theme of the event this year because, it has paid emphasis to the word ‘ Connected ‘.  Don’t we humans feel the need to be connected ? To feel connected to ourselves, our family, our friends and the world ?It gives us a sense of belonging.

According to WHO’S report Preventing suicide : A global imperative – a person who feels connected to the world through family, friends,religion and society is less likely to commit suicide than someone who feels isolated or alone.

We as a society are partial contributors to the rising number of suicide cases in India. We form rigid rules and set very high standards for our generation to follow. And when youngsters are unable to fulfill the society’s and family’s expectations, they feel unworthy and guilty. They opt to end their lives to be free from the pain and anguish.

It’s said that for every one male attempt there are three female attempts at suicide. This indicates that women are more vulnerable and succumb to this disease. This is probably because we have high demands and expectations from the women folk. In India, especially women are expected to fulfill all their duties faithfully and they would be blamed for every wrong thing that happens to them.

They are expected to be good daughters, good mothers, good wives and perfect daughter-in-laws. Women are failed to be seen as human beings.  In India domestic violence is one of the main factors for female suicides. Male attempts at suicide is high in India, and almost all the cases are successful. According to stats the suicide rates in southern states like Tamil Nadu and Kerala are much higher.

Depression is the major cause of suicides. Timely help and treatment can prevent people from falling victims. The good news is that people who seek help in the form of therapy and medications from Psychotherapists and counsellors can lead a happy and holistic life in the future. One shouldn’t hold back while feeling low. Seeking help and support from our family, friends, relatives or our therapists can bring great relief. It’s better to find our way out from the pit of depression, before getting consumed by it completely. There is nothing more valuable in this world, than our own lives.

Even in our own families much emphasis must be paid to mental health and an environment must be created where family members feel free to discuss their complications. Being healthy means also being mentally healthy.  Individuals who are brought up and who live in a warm,supportive and a friendly environment will never opt to end their lives because they already have a strong support system.

Unfortunately, there are many families, where the family members hold grudges against one another. There is so much indifference, coldness and uninvolvement that sometimes the troubled family member, doesn’t know whom to turn to when they are caught up in a difficult situation.

People who are isolated socially are at a greater risk of committing the act. We need to reach out and connect with those who are in this position. Social isolation leads to depression. It’s essential to maintain strong bonds by the way of friendships, bonds with family members and relatives.  We could also be part of like minded communities and groups. It’s also said that people who are religious or spiritual in nature generally don’t choose to commit suicide.

A supportive and well connected community of family, friends and relatives is essential in today’s fast paced life. We all need each other in some way. Let’s encourage rather than demotivate. There is still a huge amount of stigma associated with the issue, that needs to be ended. It’s time we learn and share whatever information we can on suicides and create awareness, as life is valuable. It needs to be cherished.